About Us » School History

Founded in 1894, Escondido High School is rich in history, traditions, and spirit. We invite you to explore our history and learn more:

Onward Cougars, fight to win
On to victory.
Onward Cougars, don’t give in
Keep that loyalty.
Hear us cheering,
To the end,
Every loyal one of us.
E – U – H – S
Fight until the game is won! 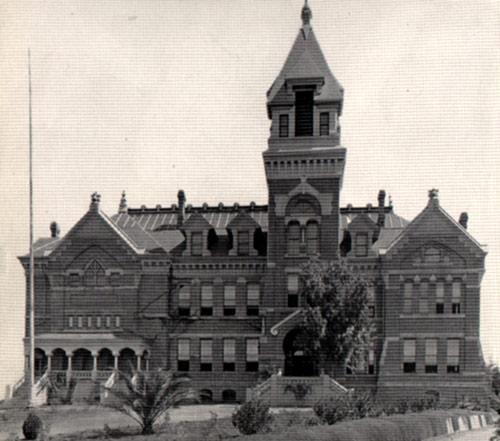 The building that would eventually become the first Escondido High School was built in 1882 by the University of Southern California. Located at what is now the intersection of Ivy Street and Second Avenue in Downtown Escondido, the University used the building as a Methodist seminary for ten years. However, the operation ultimately proved to be too costly, and the seminary was forced to close its doors.

In 1894, USC was forced to will the building to a man named Henry Putnam. Shortly thereafter, Mr. Putnam donated the building to the newly-formed Escondido Union High School District. With that donation, Escondido High School (EHS) was born. When classes first began at EHS, total enrollment at the school was less than 100 students.

Classes continued at the original EHS campus until the evening of May 23, 1929. It was on this day that the historic campus was engulfed in flames. By the time the fire was extinguished, the beautiful red brick building was nothing but a memory.

On March 22nd, 1927, the new Escondido High School campus opened to students for the very first time. Located just south of the original campus at what is now the corner of Fourth Avenue and Hickory Street, the new EHS was a modern, three-story building that eased the overcrowding problems the school had been experiencing. With the construction of this new building, school spirit rose to an all-time high, and EHS athletics won three county championships that year.

In 1933, a major earthquake in Long Beach was felt all the way down in Escondido. It gave all Californians quite a scare, but none more than state school officials. After the earthquake, they ordered inspections of all California schools, and the new EHS campus was one of the ones deemed unsafe. The state sent a letter to the school district confirming the results of the inspection, but the letter mysteriously disappeared…

The EHS campus grew on April 28th, 1939 when a brand new, $134,000 auditorium was completed. With 252 seats, a basketball court, two new classrooms, makeup rooms for drama, a projection room for movies, athletic locker rooms, and a stage, the auditorium offered EHS students many new academic and extracurricular opportunities. At the time, it was one of the saftest, most advanced buildings in the state with 133 tons of reinforced steel and 52 tons of structural steel used in it’s construction.

The 1950’s brought more overcrowding and a need to build a second high school in Escondido. As a result, the school district announced plans to purchase a 45-acre piece of property on North Broadway in North Escondido. The property was to become the site of a brand new school called Vallecitos High School.

It would eventually take two voter approved bond measures to complete the construction of Vallecitos High. However, when the school district went to the state to start the process for the second bond, that missing 1933 earthquake safety report suddenly turned up. State officials stood by their claims that the main building at EHS was unsafe, and they said that the district was not allowed to attempt another bond measure until EHS was vacated.

Thus, on March 15, 1955, almost 28 years to the day since it had opened, the Escondido High School main building at 4th and Hickory was forced to shut its doors forever. For the next two years, students took their classes in new buildings at Vallecitos, in the auditorium and other “safe” classes at the old campus, and in temporary tents. Most of the suppossedly unsafe campus remained standing until the mid-1980’s. Ironically, when demolition crews tried to tear it down, they almost couldn’t because the massive bricks had been sealed using cement instead of mortar. Today, an apartment complex stands where EHS once did.

In October 1954, construction wrapped-up on the first phase of Vallecitos High. With the closure of EHS, and the subsequent passage of that second bond measure referenced on the previous page, the Vallecitos name was dropped. Instead, the Vallecitos campus officially became the new home of Escondido High School — the same EHS campus we all know today.

One of the greatest sporting events in Escondido city history took place on November 3rd, 1967. It was on this day that Escondido High and new crosstown rival Orange Glen met on the football field for the first time. The hype was unlike anything ever seen before. It all began in at 7 AM with a spirit breakfast on the senior lawn. After this, students participated in a 1 hour pep rally to get ready for the big event. At lunch, the band and cheer squad performed. After school, the Cougar faithful got in their cars and went to Felicita Park for a pregame rally.

Finally, the moment had arrived — it was game time. An estimated 11,000 fans poured into Escondido High’s Memorial Field. Traffic was so bad getting to the game that it took one hour to travel from the corner of Washington and Broadway to the field. Unfortunately for the Cougars, the game couldn’t live up to the hype. Led by Coach Dick Disney, the Orange Glen Patriots beat Chick Embrey’s Cougars 14–7. After decades of being the only high school in town and dominating regional football, EHS was eliminated from playoff contention as the Patriots went on to an 11-0 championship season.

In many ways, the 1990’s signified a renaissance for Escondido High School. 1994 marked the 100th year of classes at Escondido High School. The subsequent year, the Cougars once again found themselves in the CIF-SD championships for football, making 1995 one of the most memorable football seasons in recent memory. Then in 1996, Escondido voters approved Proposition A, bringing millions of dollars in renovations to the EHS campus.

Also in 1996, it was first announced that Class of 1947 alumnus Bob Wilson and his wife Marion were interested in donating a substantial sum of money to the school to renovate Chick Embrey Field. Over the course of the next two years, through Mr. and Mrs. Wilson’s generosity and the hard work of the community, the vision for the new football stadium began to take shape. Finally, on September 11th, 1998, the new Wilson Stadium at Chick Embrey Field was opened to the public for the first time. In the end, the Wilsons donated about 2 million dollars to the project. EHS would like to thank Bob and Marion once again for their generous gift to the school — we will never forget you!

Today, EHS is a perfect blend of modern amenities and historical traditions. With another bond renovation passed in 2008, and construction recently completed on a new campus learning center, the future has never been so bright for Escondido High School.